The Cosmic Airdrome: A Rosetta Stone to the Guide! 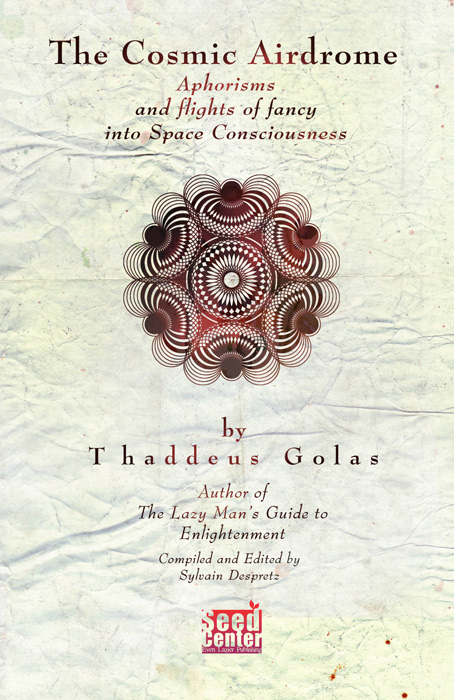 The Cosmic Airdrome is a Rosetta Stone to The Lazy Man’s Guide to Enlightenment.
Originally written as a series of annotations to The Guide  it contains explanations and further descriptions of its many concepts.
The cosmic Airdrome is a book of aphorisms and wisdom that you can open anywhere, to any page. Thaddeus Golas collected his thoughts and diary entries over a period of twenty years.
The cream of these philosophical gems, compact ideas, and graceful metaphors, is collected in one elegant volume that can work as a decoder to many of Thaddeus Golas’ ideas and visions as first delivered in The Lazy Mans Guide to Enlightenment.  The Cosmic Airdrome is a pocket companion, and friend. 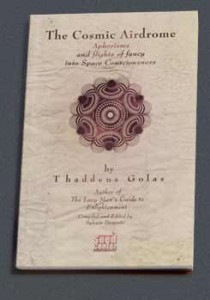 From Thaddeus Golas on The Cosmic Airdrome

Dear Readers: This book is an added reply to those who have written to thank me for writing The Lazy Man’s Guide to Enlightenment.  It is a letter to those who merely thought of sending a note.  It provides ideas for those who felt they wrote the Guide themselves.

Of course I think you who are none of the above will also be entertained.

Afterthoughts were inevitable, and it occurred to me you might enjoy them.
I have some notions I would really like to pass along. I hope here and there a line will set off a flash of pleasurable insight.

The Cosmic Airdrome (watch your head!), by Jason Stoneking

If you’re already familiar with Thaddeus Golas, perhaps through The Lazy Man’s Guide to Enlightenment, or its follow-up Love and Pain, then this book should serve as a lovely companion piece. Full of insightful one-liners, zen riddles, muses and affirmations, a Golas fan could open it anywhere and find something that would provoke a knowing smile. But if this is your first introduction to Golas’s work, then tread carefully. These shiny little gems are actually the tips of enormous icebergs, poking their heads out from a vast sea of metaphysical implication. Golas turns a phrase with easy confidence, but the pearls he casts before us are conceived in very sophisticated oysters. Any one of these deceptively harmless and entertaining little witticisms could pack enough punch to deeply destabilize one’s relationship to reality. This is not to say, however, that you can expect to read this book and dive screaming from a bridge. Almost ironically, Golas writes with enough humor and tenderness to make his readers want to stick around in this world. But his playful observations tend to creep back up on you, long after you’ve read them, and challenge the fundamental habits in your thinking. They are simple enough to read, but not at all simple to forget. On the right day, they may very well pull the rug out from under your assumptions, enough so that you will be free to drift fearlessly off into space consciousness. But only if that’s where you choose to go.

Read excerpts from The Cosmic Airdrome (©2008, Even Lazier Publishing, Ltd.)

Indeed “physical reality” is a perception of what is real from a given level of consciousness only, and what is actually happening is something else entirely. All that we see and experience, to say it in a common sense way, is translated into electrochemical signals in the brain that we then experience as consciousness.

No matter what “hardness,” logic, cause-and-effect, sensation, emotions, and so on — it is all real to us as idea.

Let’s say you really exist only as a subatomic unit of awareness and someone is showing you what it is like to live in this reality.  All you need are ideas. When we consider ideas, we think of our usual mental wanderings — we think the ideas are very light, that they can be taken up or dropped easily. Therefore, when we are told that the world is “all conceptual,” we assume it should be easy to change those concepts. And perhaps it can be easy, needing no effort — but ah! the complex ways we trick ourselves, the subtlety of it — which we better comprehend now that we know how much rapid computation there is in a computer chip — a process in ourselves we would call “unconscious.” Concepts are not that easy to change. Manipulating the physical world is child’s play compared to the emotional slips and slides that occur with concepts, until you learn not to resist them.

As human beings, we are habituated to recognizing as “reality” that which does not change according to our whim.  And there have been times, I must say, when I was grateful that Earthly reality did NOT change readily according to my whims or the notions of others. Yet how often does the ignorant, inexperienced newcomer appear and completely bypass what one has accepted as reality! It is very difficult to know what is rooted in the laws of our relations as unique beings (which do not change), and what is the false reality we have “bought” because of conceptual tides in ourselves.

“Nothing prevents me from having a better idea about what is happening.”

Out of all that I have learned in this lifetime, what would I want to say if I knew I were to die tomorrow? I think that is a legitimate starting point for writing a book.  It leaves out all question of personal reward in reputation or money — and also all question of currying favor or the inhibitions of politeness and fear. And in any case we should write as well as we can for the generations who come after us.  So much of history is lost because of what we do not say, what is taken for granted.

By assuming that I am about to die, I can leave out all hankering for agreement, for consequences, for the fruits of my labor.  I believe this is a proper attitude, for whether my end comes tomorrow or in forty years, the effect in time is the same. Sooner or later I will not be here, but the words will remain. And whatever my present lack of appetite for the hurly-burly of human interaction, what words do I want to leave behind?

It is usually tiresome to hear a long drawn-out account of someone’s dreams.   Only the great poet can legislate dreams.

The Female Principle is creation from within, giving birth to forms and systems out of the stuff of the universe, out of undifferentiated life.  The Male Principle is the will to impose form and order from without.  The Buddha Consciousness is the compassion that tempers the tension between the two.

In doing all this writing, I am pushing to diminish the regions of our ignorance and error.  I want to correct the blundering that comes of not knowing the rules, if any.

It is true that when I fail in an intention it is, I assume, because I am ignorant.

Once when I took some trash to a country dump, there was an old but well-manicured Chevy pickup truck in front of me, moving very slowly. I had my car completely turned around before the driver, an old man, had backed up to unload. As I was going back to my car after tossing a bag of trash, I saw a little girl about five years old on the passenger side of the truck.

The look on her face! It was a moment like Joyce’s girl in the stream in Portrait of the Artist as a Young Man.  She was shy and proud and pleased and amazed, astonished at the large earth-moving machines and herself tiny in the scale of the excavation, delighted that she had been allowed to go along on an important trip, full of innocent lovable pleasure — all this was in her face at once.

If only I could always be so innocently grateful to God.

What a blessing to be the witness of her joy!

Repeat the question:  What is the degree of greater consciousness from which I am presently retreating?

All excerpts ©2008, Even Lazier Publishing, Ltd.

Category(s): Uncategorized
The Lazy Man’s Life is a slice of 20th Century history.
Hear Thaddeus Golas tell it in his own voice!